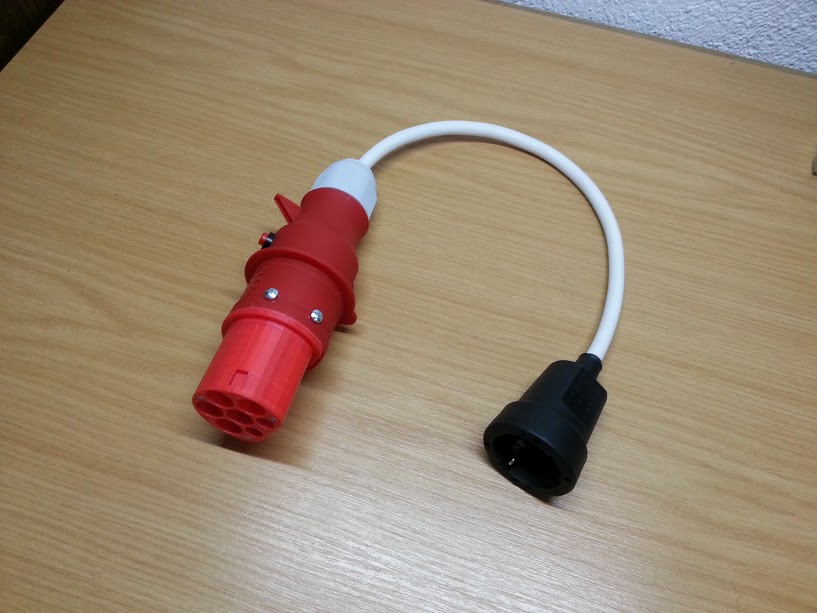 I just bought a Mennekes type 2 charger -> normal wall outlet shucko. and after I have tried it I will let you know if it works. I guess it will. Type 2 charge stations is where electric cars charge. Maximum charge for eu shucko outlet is 3,7kw and 1-phase is only needed for a Soco.

But the outlet is not setting the max charge if charging power is below the output capacity. It's rather your charger or the battery specifications. I have seen maximum charger for a Soco battery at 15A and that's s about 70v x 15a = 1050w charge per hour. Still with an adapter you can charge at more locations than just your normal wall outlet type that you find in your neighbourhood and that's why I bought one.

To buy your own adapter. Local market price for online stores in Europe is at least 250€

This topic was modified 1 year ago by flyingelectric
17 Replies

I can confirm that the Soco bikes can definitely be charged from Type 2 charge stations.  I have used a Type 2 adaptor for over a year now, and as you can see from the picture I have had no problem charging using the car charge points.

It's a great advantage if you are out and about and need a top up, and more importantly, for the time being anyway, it free to charge here.

Is it possible to make a picture how you built this setup?

Unfortunately I didn't take too many pictures when I was building it, but it was pretty simple.  I initially used the standard charger mounted in the space for the second battery, and routed the charger cable out under the seat so that it could be plugged into the charging socket when I wanted to charge.  I bought the type 2 plug and lead already made up, and added an IEC C13 plug so that it could plug directly into the charger.

This is the setup you can see in the original picture.  Later I got a faster 10A charger and changed the setup to make it easier to use.  I got the right connector (can't remember the part number/maker) so that the new charger could be permanently connected to the bike, and replaced the charging socket on the side of bike with an IEC C14 panel mount socket so that I could plug a charging lead directly into the bike.  I had to make a small adaptor plate to fit the fixing holes of the existing charger port.

This setup meant I could also plug in the normal charging lead when charging at home without having to open the seat, or the battery compartment.

The obvious disadvantage of this setup was that you could only use it in dry conditions or indoors as neither the charger nor the connectors were IP rated.

This post was modified 1 year ago by Oscar
Reply

The soco has an outlet for charing the bike with the battery inside its compartment.

The cables going there are only positive and negative. The outlet here can be changed to anything you want it to be like XT60 or XT 90 4mm banana contacts and as ulstersoco here used C13 contact which is used for example stationary computers and older art and lcd screens.

The original installation in the soco certainly allows the battery or batteries to be charged inside the compartment, however this meant the charger needed to be connected either directly to the battery, or through the charger port on the right of the bike.

The installation I made up placed the faster charger permanently inside the bike (under the battery compartment).  The DC output of the charger was connected to the charging circuit of the bike using the connector under the seat, and the original charging port on the right side of the bike was replaced with an AC IEC C14 socket (the same type of socket as on the original charger).  This produced a built in charging solution that could be used either with the type 2 lead, or the original home charging lead.

It also meant that I was able to install the battery paralleler later on, as it used the same DC connector.  The existing Soco connectors on the batteries were not changed, and there was no need to access the XT60 connectors inside the batteries.

This installation left the bike with the same type of charging socket as on the Zero electric motorcycles range.

Yes I get it. I just mean this as information. I really dig that you made it work on your bike. That is pro! 😀

and of course it can be explained more in detail.

@ulstersoco You are using standard super soco charger (5A, 10A... e.g. like this: oudoordreams ) which is "built-in" to the bike and then you have type 2 adapter that is plugged in to the socket on the side? Is this so?

@ulstersoco This is really cool. Can you clarify whether the bike still charges at the same speed as it would when plugged into a normal wall outlet? Or are you getting faster charge times as well?

I had been thinking about using twin 10A chargers (one for each battery) to double up the speed again.  I reckon this would be the most that Soco would allow and still maintain the battery warranty.

I think this would have necessitated using two phases from the charge point, as most of the local ones are rated are 16A max per phase.

Of course I could have still charged the same speed at home, by using two domestic outlets, but I never went any farther with that idea, primarily because I couldn't figure out where to find enough space to put the two chargers on the bike.

@sedamoss You'll get as fast of a charge as what charger you're using to convert the power. Being that the voltage is much higher than what the bike battery can handle, you cannot just use a direct adapter. You use the adapter to essentially turn the public charging station into a wall plug. You'll find relatively inexpensive adapters these days (if you trust them) Wondered why these cables cost 25 €, got the explanation here, software/a circuit board is included in the connector to simulate that a electric vehicle is connected.

Am I correct that this is essentially a pass-through adapter and no voltage change happens?

I'm looking for a way to charge from a level 2 public charger, but those output 220 - 240V and the Soco charger requires 110V. I'm not even sure where to look for that kind of adapter. Any tips?

@cubeyterra The original Soco charger has an input range of AC 100V-240V. The adapter you either connect to your plug or instead of using the removable, country specific plug that you have on the one end, you use one of these that plugs directly to your charger like the white one UlsterSoco shared above. Your charger will handle the conversion from there. The only downside is your still limited by the 4.5a the charger puts out.

@sdreaver Thanks for that info. My Soco charger handles only North American 100-120V input, 60Hz. I guess I'll have to get my hands on a European Soco charger if I want to do this.

That's odd. I woulda thought they use the same charger and just swap out the plug. It could possibly be rated for higher but just not labeled as such. But being that you charge at 110V, depending on how many Watts the board inside is rated for, you could boost your amps going out.