so to replace the cells is there de-soldering that needs to be done?  this sounds like an awesome alternative!  🙂 Most common metod to connect this cells is to use sheet metal strips instead of wires, if you will build a battery from scratch a Spot Selder station is a good investment.

Super Soco batterys look different, maybe the transparent top can be unscrewed and the the cells is just clamped together, not soldered, hard to say on this picture;

Yes, you can add another battery as long as voltage is the same. SuperSoco TS and TC batteries are made of 17 series and each group of cells are charged to 4,1v per cell with the original charger. Maximum charge normally is 4,2v per cell but by charging and stopping at a lower voltage you get about double cycle life or use from your battery. I estimate use to 20000-40000km for a Soco battery. By then a full charge could give 50% of full capacity from when it was new.

I used my battery for 5000km before selling it as I didn't need it anymore.

Charge voltage stops at 69,7v with the original charger. I have seen that you can charge a Supersoco battery up to 15a, maybe its possible a little higher in risk to destroy BMS(Can't buy replacement). I have charged a battery that I used with a 8a charger and it worked flawlessly. The faster you charge, the more chance for the battery high temp error. It will in worst case scenario turn of charge or delay use of your moped until temperature gets back to normal or you unplug and plug back the charger or restart your Supersoco.

How to add another battery to your Supersoco:
You need to rebuild it all. (Very advanced level)
You can build and add a battery in parallel with the same attributes as the original battery. (Also advanced, buying the battery makes it easier but still connections must be correct!)
You buy a generic battery and only want to use it without the original battery. By doing so you lose the battery % status monitor. Still you need to connect battery + and - to the controller correctly.

Interesting. So if I add the battery in parallel with the original one, even without the official Y-connector, I should be able to use the battery % status monitor, is that correct?

To answer your question. Yes. If the original battery is connected in parallel the batteries share voltage and so you may se the % battery status.

The best in this case would be a li-ion or other lion cell type battery with a max voltage of 4,2v per cell each charged to 4,1v for a total of 17 in series. That would be a perfect match.

A battery consisting of lead acid cells for example are 2,15 volt so 17 in series doesn't add up to the same voltage. Also even if you do add upp in series to the correct voltage with lead acid cells you still need the "load curve" when the motor is draining the battery to be somewhat similar to the other battery or there will be inefficiencies and other dangers.

Two easy rules can be:

parallel same type of cells, voltage and same AH capacity for the battery.

Most efficient would be a battery of same Voltage and same AH ratings. Then the larger or more powerful battery will not lose any energy by giving aid to the smaller or weaker battery. (transfer losses is bad)

The power of the battery must be able to sustain 3000w of power that the Supersoco may use without to much voltage sag. (sag is in essence voltage dip when motor is running at load or high load)

A cellphone battery that is 3.7v and 2AH. Even 17 of them in series will have a very large voltage sag and cut power if connected to a Supersoco motor system.

Wrong connections and things can go south or burns, damaged or fire.

So be careful and watch diy videos and read on before attempting anything, at least before you know basics or more and are willing to take the risk. If you learn, you will understand why a Supersoco always can be fixed but not necessarily with original parts. Until then don't do anything that you are unsure about.

When charging other rules apply.

A smaller battery charged via the original charge socket in parallel with original battery from the outside will or may overcharge that battery.

A larger capacity of a battery will charge it less than full. Exactly what will happen I can't theorize about.

Other dangers. If any damage by other means one cell group in either battery losses voltage or brake down there will be an occurrence of equilibrium. That means that each battery want to have the same voltage and is a danger in a battery setup like this if that ever happens.

For example you connect your newly build, bought battery sitting at 0% with your fully charged 100%. Then they want to equalize at maximum speed. It will become hot in the cables and... maybe the BMS in the original battery shuts of current as it should, as max is 35a or 40a or there will be damage and fire.

This can also happen in use if a spike or crash punches holes in cells and a high voltage difference occur between the batteries. (The correct way of making a bigger AH battery pack for your Supersoco is by paralleling all cells first rather than paralleling big high voltage series batteries)

My original plan was to use 5Ah Li-ion cells in a 16s6p configuration. That would give me a battery with max voltage of 65.6V and a capacity of 30Ah. However, that voltage is slightly lower than the original.

Should I switch to a 17s6p configuration? It'd be annoying and expensive to buy another BMS for 17s but if my original plan is risky I'd rather do that. What do you think?

I have my spot welder and about 200 of these cells ready to build the new batteries. Any help would be appreciated!

They are most probably fake, normal prices are 2-10 dollar each. At minimum 1-3 dollar for okey used cells that need to be tested before being used.

What is the name of the cells that you have?

Batteries what they are called and charged to:

so the Supersoco battery is kinda of a

Double check, tripple check voltage positive and negative when connecting cables easiest with voltage meter. I have connected cables the wrong way and before that I was just thinking: "Who really connects wrong way?" its SO easy but its not easy when you do it wrong.

I'm having some trouble finding a 17s BMS. But in order to use the same charger, I think I really should go down that route. Now that I'm thinking about it, I'm thinking my best option is probably just to build a battery pack with as many cells in parallel as I have to spare, so something like 17s 10p.

Good. I think you can do it.

TIP. If you open up the wide power connector there should be a XT60 connector inside. By fitting a parallel XT60 here you can connect your original battery with the one you build.

(you need to drill a whole and you can make an extension cable as well. Then you can separate the batteries and charge as you wish without opening up the original battery to disconnect the connectors.)

EDIT: I just realized you can also put two cables down to the controller + and - and use whatever connector you wish here with you own build battery. 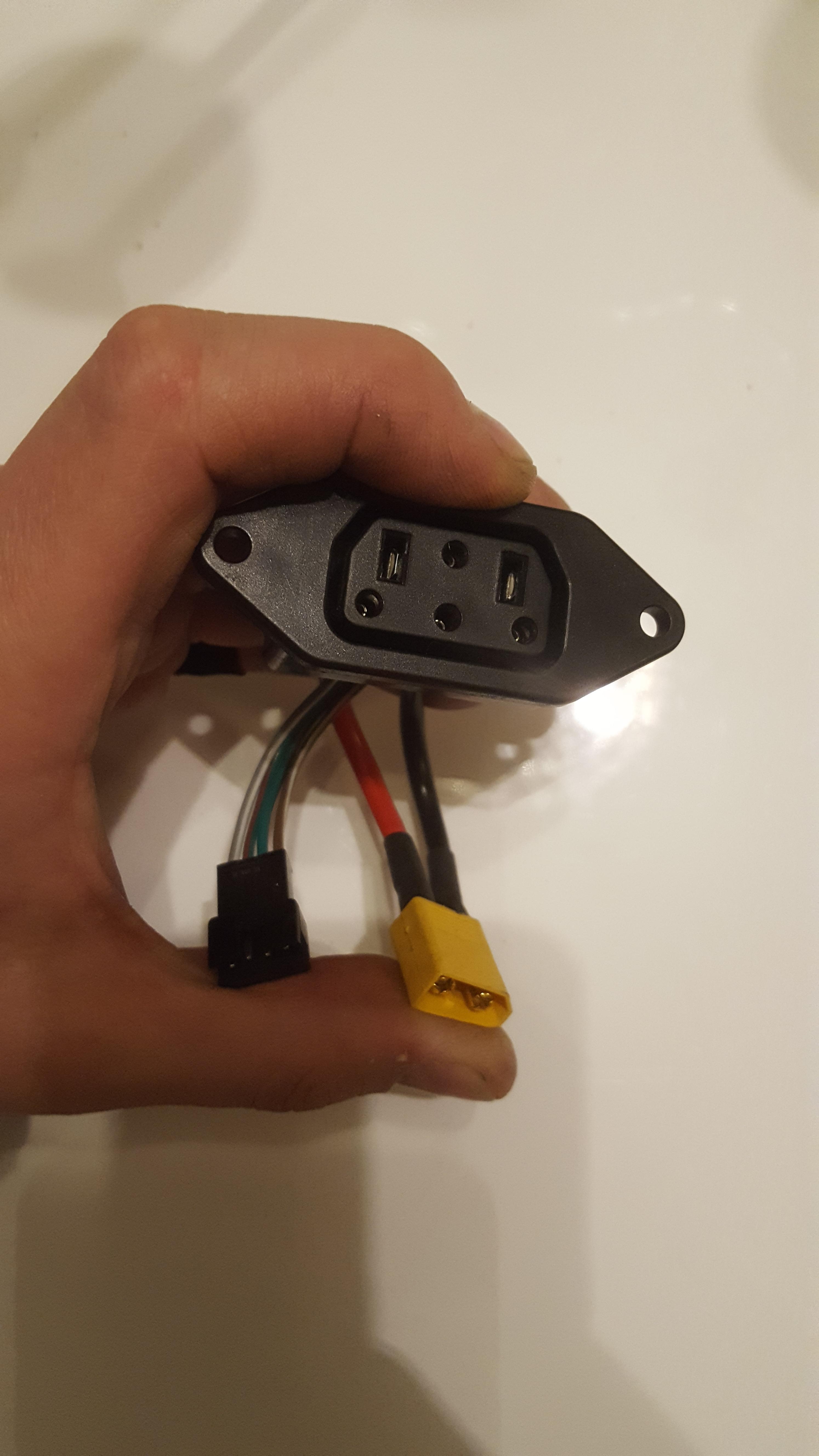 This post was modified 6 months ago by flyingelectric
Reply

About 3 months ago after the upgrade of the computer, I had problems. The CT fell silent after driving for some time on the 26Ah battery.
This is not strong enough, a replacement battery from the dealer received the type 30Ah. Problem solved.

With the 2nd battery came 3 days later the same problem with 1 difference, this indicates alternately empty and full but the TC keeps on driving.

Tomorrow to the dealer, both batteries will be tested.
I'll keep you informed.

What speeed where you at when it started acting strange?

I don't know how the y-connector works more than its a plate of electronic components and big capacitors switching between the two batteries while driving.

Does the 26AH charge?

What does the voltmeter say? (or connected only to the battery what percentage does it say?)

Have you thought about maybe that the smaller capacity battery is empty first as you start with two fully charged batteries with different capacities but one will be empty before the other one?

It is a problem that they manage to dribble away the smallest question, have tried to ask if you can get an exact size in teh battery or a special charging contact but it seems that most of them runs everything via Google translate or are not technically proficient at all.
However, the prices are considering, but I do not think the choice of seller is so critical, they have the all the same technology, have bought most batteries at Riskcell Official Store where it was possible to confirm that I really got Japanese quality cells, even bought some battery from a seller who called himself Z Green or similar.

Another interesting tips can be;

Just got a newsletter from Sky Technologies
https://www.aliexpress.com/store/1473151?

They stated that you can get rid of the taxes if you buy from them;

All parcels be shipped by UPS or DPD,the following country no need to pay customs fee:

The delivery time is usually 7-15days after dispatch
For Switzerland, Norway buyers
All parcels usually are shipped by UPS shipping,it will air to France first,then to the destination countries via DPD or UPS.
We will pay the tax in the France Custom .you have to pay the second tax fee in your custom .nit usually take 10-20 days after we send.

The user cleanfuture is building an awesome programmable ECU for the Super Soco but needs your help!
Check out his kickstarter page to find out more!